When is the best time to fly to Luton?

R16 650
R14 020
R11 390
R8 763
Whilst there are several times of the year to choose from, May is seen as the time to fly to Luton, however, it is possible to get good deals throughout the year. If weather is an important factor for you when considering when to fly to Luton, the warmest period tends to be July, with the wettest being October.

When is the best time to book flights to Luton?

The price you pay for your flight to Luton may vary depending on when you book. For the best chance of a lower fare, look to book 60 days in advance of your trip. Fares are likely to increase a fortnight or so before your departure date.

Which day is cheapest to fly to Luton?

At the moment, Monday is the most economical day to take a flight to Luton. Saturday is likely to be the most costly.

Despite its small size and inconvenient distance from central London, London Luton Airport  still handles nearly ten million passengers every year. There are plans in the works to extend the airport’s limited runway facilities, which will eventually enable it to receive larger aircraft, and so serve more travellers.

Flights to London Luton Airport are mainly offered by low-cost carriers such as easyJet, Monarch Airlines, Thomson Airways and Ryanair. The cheap flights to London that these airlines offer prove too enticing for many travellers, who are willing to put up with the lengthy commute into the city that flying into Luton entails.

Most flights in and out of London Luton Airport serve European destinations, though there are some connections available to North African and Middle Eastern destinations, as well. 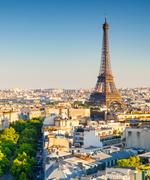 Flights to
Frankfurt am Main
R7 771